The women’s march last year was an enlightening success, and this year, the girl power is in full effect and going strong. Our favorite part was the witty, amazing posters that came out of this whole terrible Trump era. The resistance is here, and it’s made up of beautiful, fearless women and their supportive male allies.

1. This fearless dreadlocked activist came complete with headphones, a kickass shirt, and a simple, poetic sign sharpied on a piece of cardboard. “Respect my Existence Or Expect My Resistance” her intelligently succinct sign proclaims. 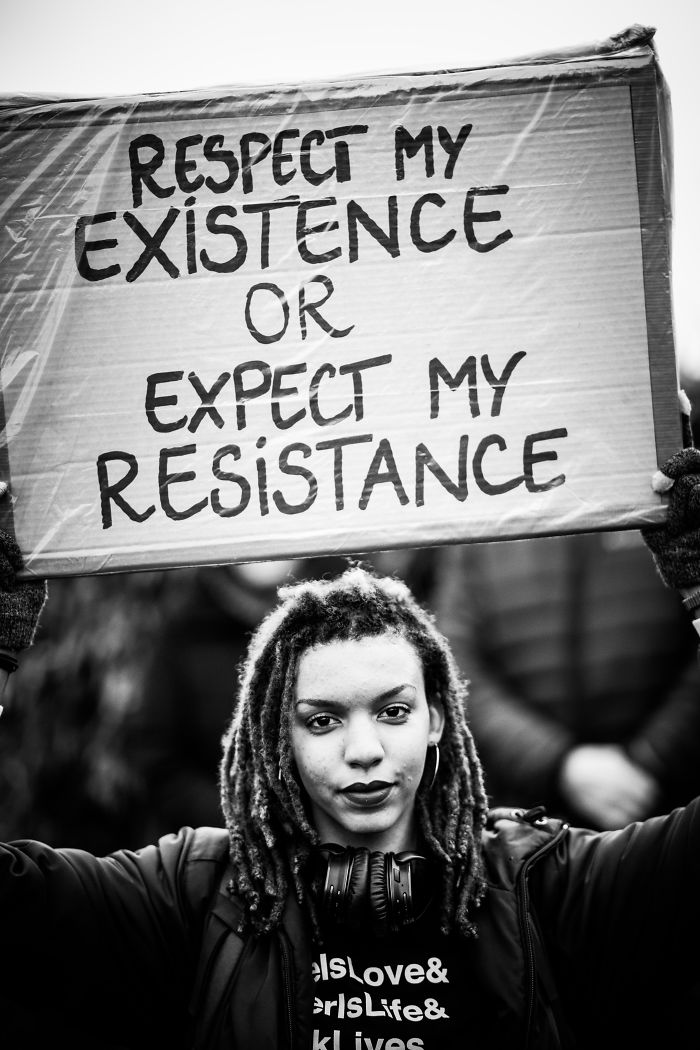 2. This sign is so New York, and we love it. An angry lady liberty asks her cohorts to hold her earrings, removing sassy pink hoops with a furrowed brow. We always like a feminism with a dose of sass, so we’re into this sign. 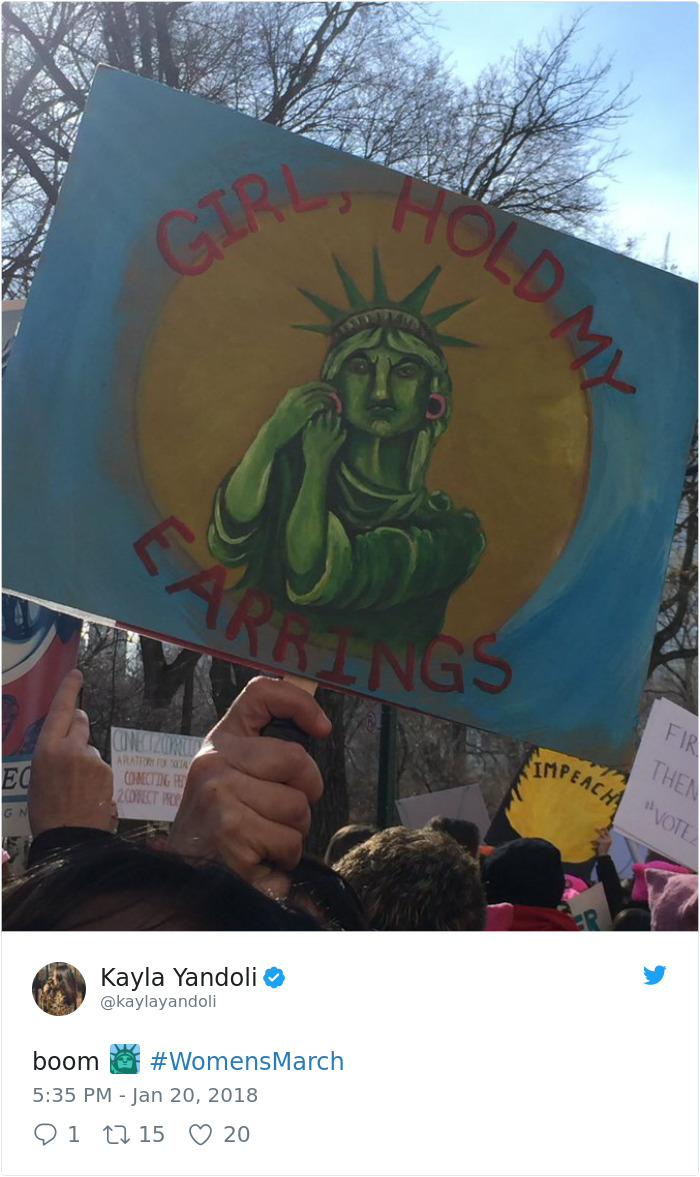 3. Highlighting the stupidity of ignorant, abusive men and out POTUS specifically, this smart dude put a sign on his adorable dog, who apparently knows more than the majority of men in Hollywood. You tell ‘em, dawg. 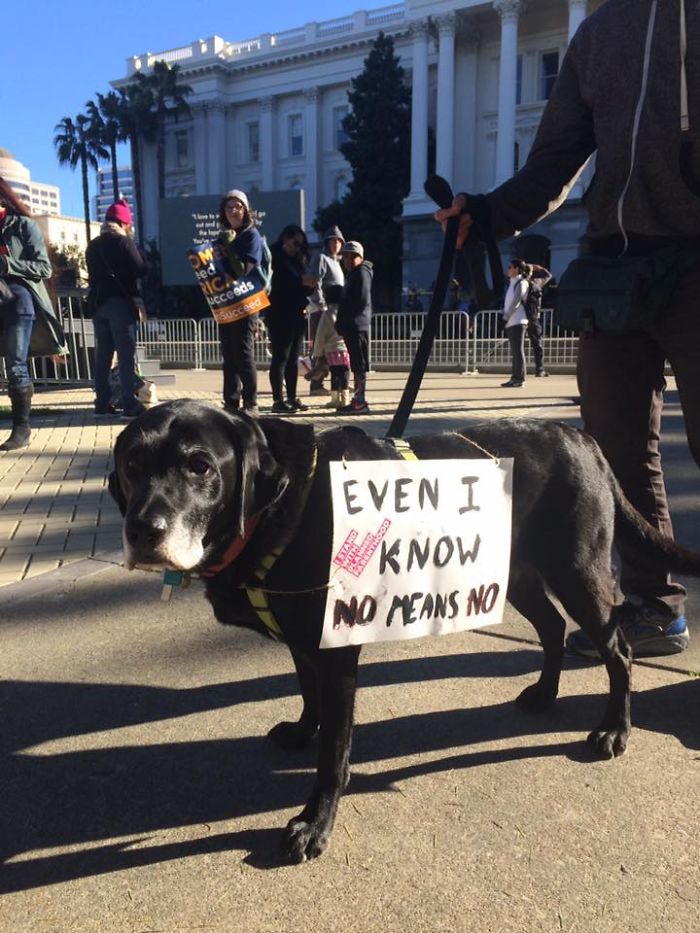 4. This person begs for Papa Obama to return to office and replace the weird Cheeto toupee that is “babysitting” America for the next couple of years. We agree, and though we don’t want to put the Cheeto’s mess on Obama, we would love for someone to step in. 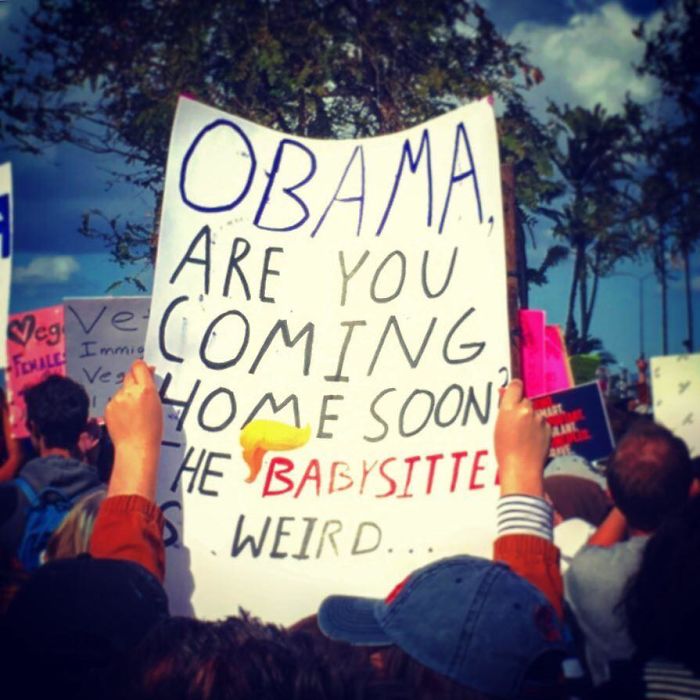 5. This lady’s fierce energy is just iconic in this image. She takes the tired old misogynistic cliche of “boys will be boys”, replacing the last word with accountable. This chick isn’t going to take anyone’s bullshit, and she gets us fired up too! 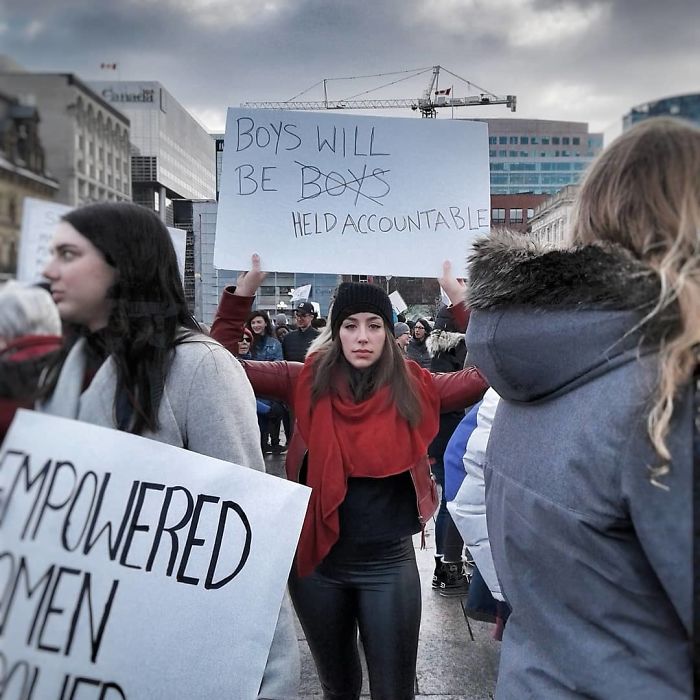 6. At the Philly rendition of the women’s march, this woman combined the now popular “Not My President” chant and combined it with that famous made up word from Mary Poppins, replacing the jibberish with every prejudiced-ism there is. Points for creativity. 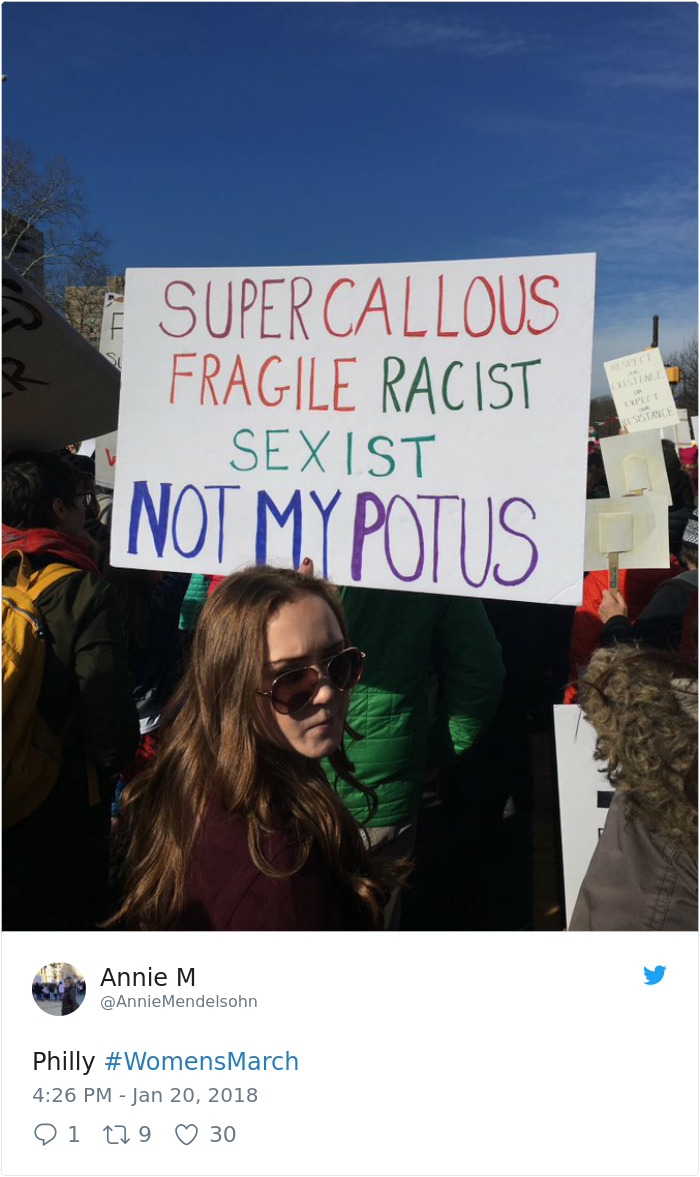 7. This empowering chick in a wheelchair isn’t afraid to poke a little fun at her disability, wearing a shirt that says “I Run Better Than The Government” as she gives us a Rosie the Riveter pose in her chair. We have to agree, though. 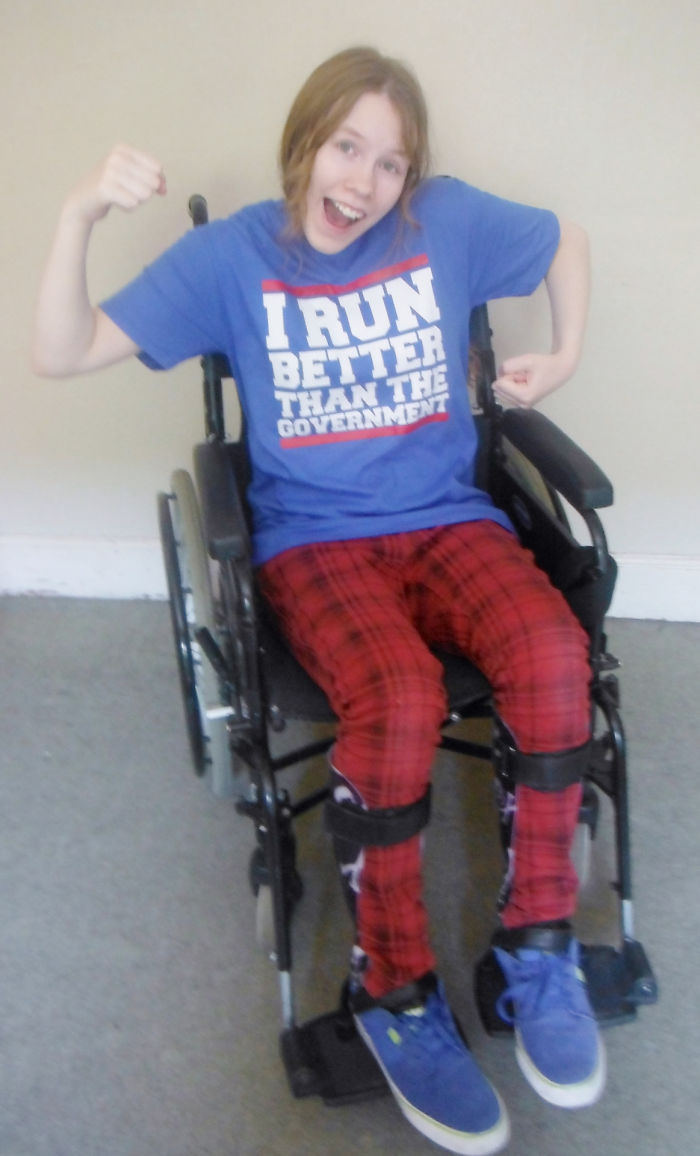 9. This fierce lil’ feminist is giving us some serious girl power vibes, and we’re honestly convinced that she would be the next Hillary. She challenges Trump’s disgusting wall, saying that no matter what wall they build, her generation will tear it down. Complete with a rainbow of hearts representing the rainbow of the human race. She is the coolest. 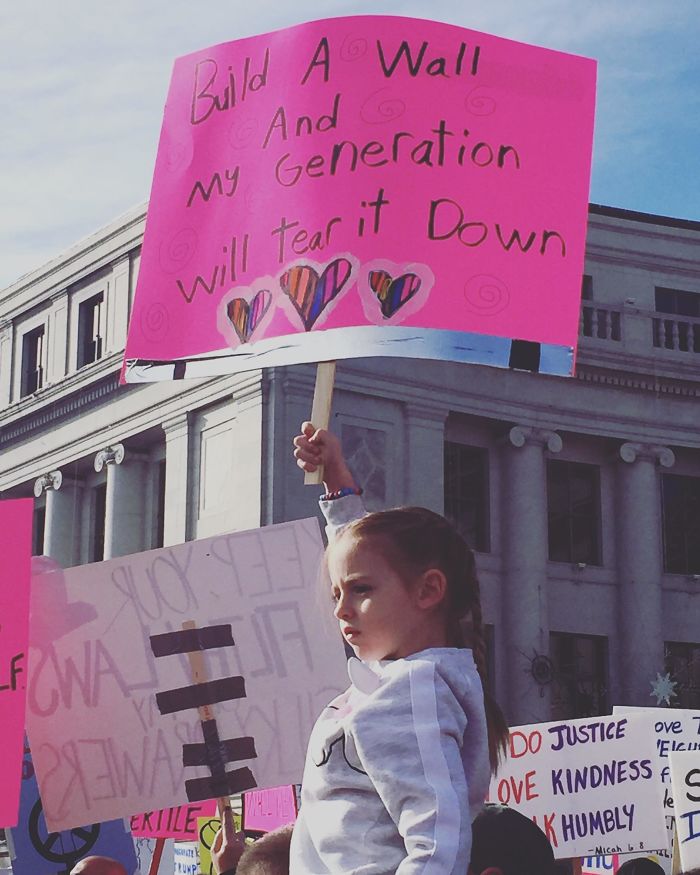 10. Or this simple black and white sign that was definitely one of your social media statues at some point since last year turned ridiculous. It sums up all of the reasons that are too long to list on a sign and offers a resounding, collective eye-roll all women had towards this year. 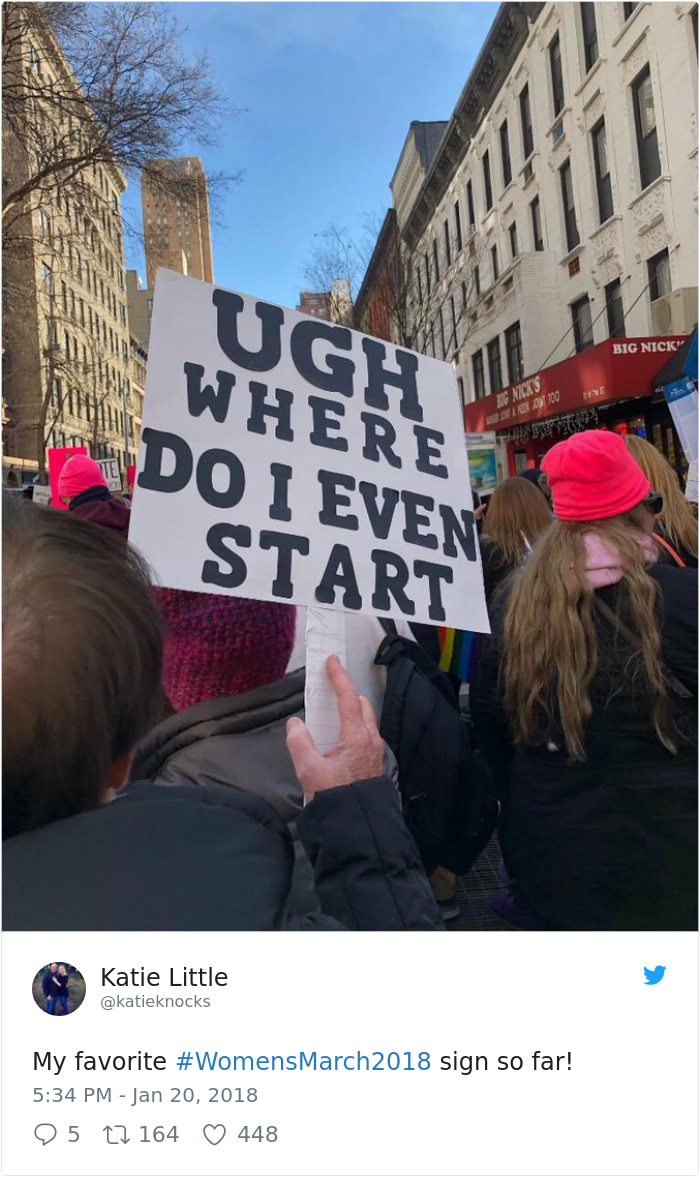 11. This sign is hilarious but messed up and totally true. This real does feel like an episode of Black Mirror or Handmaid’s Tale, and it’s not entertaining at all. All of your favorite dystopian TV shows look like real life, this year, and we are not down. 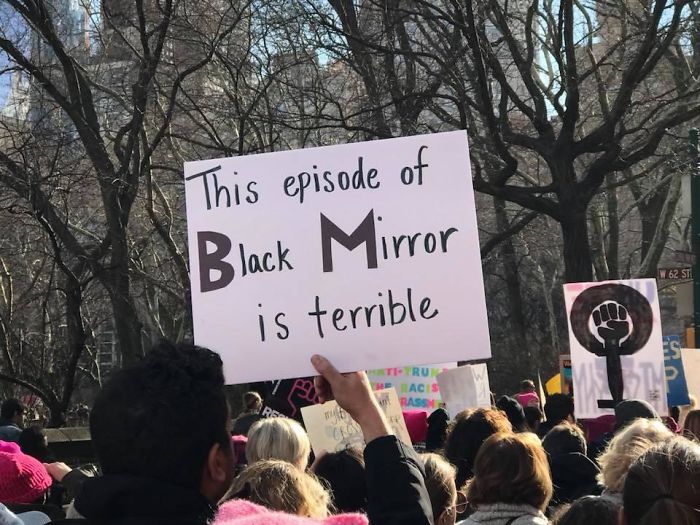 12. We love the support that this dad has for his daughter. He’s holding her and her proud message up on his shoulders with the proudest smile on his own face as she displays the witty sign above. The cabinet is abysmal, but at least this little retro cutie put a smile on everyone’s face. 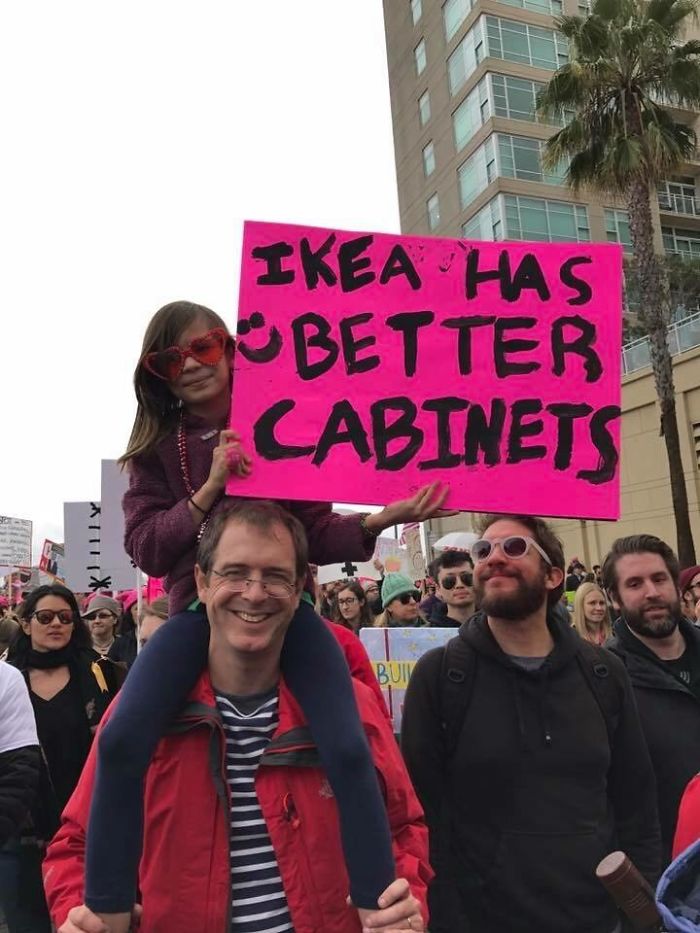 13. Dr. Seuss is usually a sweet children’s book filled with rhymes. This twist on Seuss words at the LA march gave an important lesson on consent to Mr. Trump himself, and symbolized the many innocences taken during a tragic lack of consent. 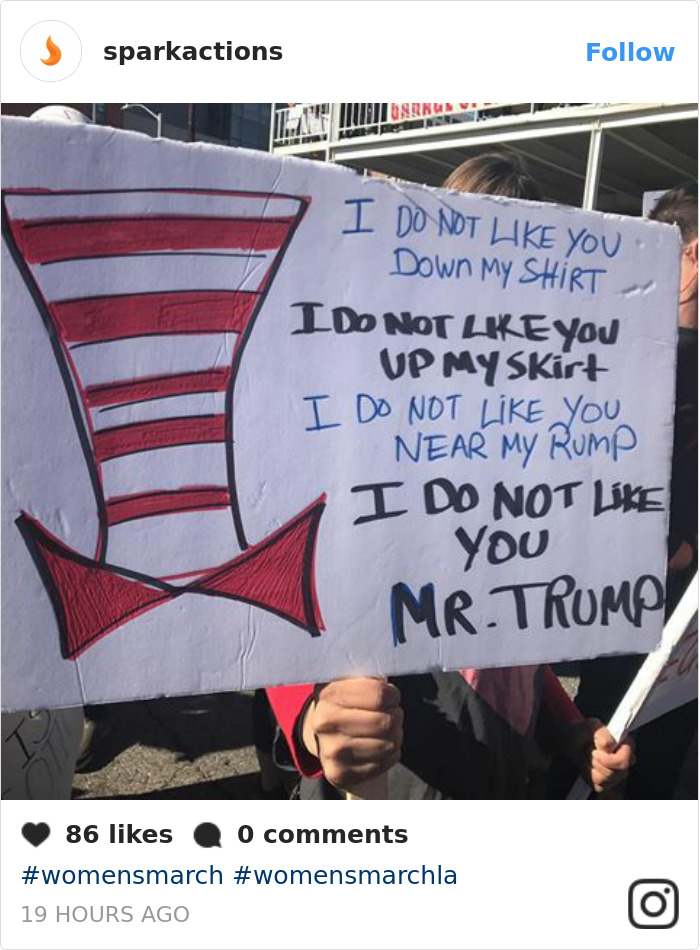 14. To end on a lighthearted note, this multi-hued babe reminds us that most importantly, you have the right to express yourself and all of your colorful emotions. Be free. This picture pits it clearly. Also, her drawing color scheme matches her outfit, so she’s probably trendier than you. 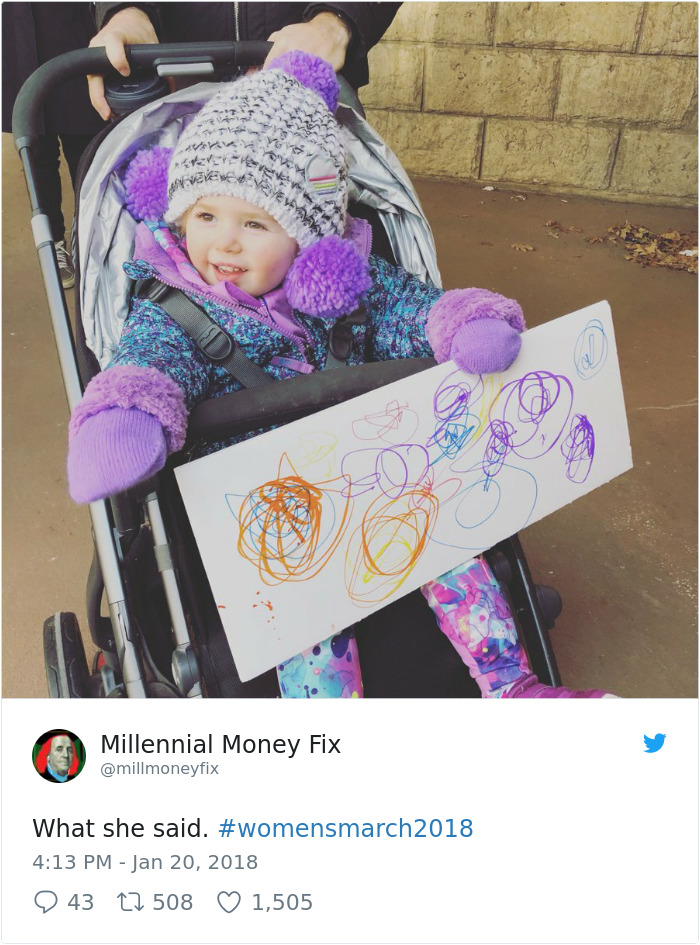