Some people have a strong sense of justice and it just so happens that sometimes those people are women. History knows many men and women who stood up to the system – against war, racism or fighting for human rights. We are surrounded by heroes who might not even know it before the right time comes. ‘Ordinary’ women can turn into real superheroes trying to prove their point or help a person in need (or even a whole country!). Some photographers are lucky enough to capture these incredible moments on their cams, so we all can enjoy and appreciate the bravery of these women. Here are 15 captivating images of women standing up to the system.

Activist Josephine Witt was against the economic policies of the European Central Bank, so she burst into a press conference held at the bank, jumped on a table and threw confetti all over Mario Draghi, the ECB President. 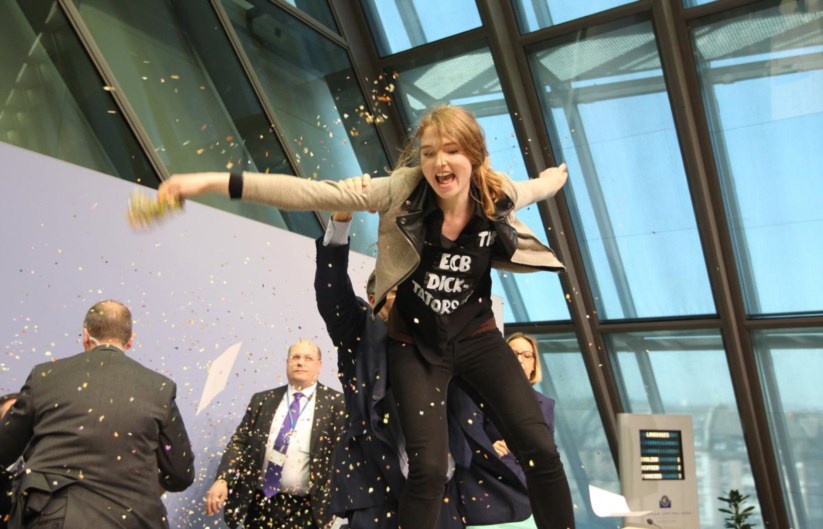 Tess Asplund became a world-known anti-racism icon after she stood up to a whole procession of 300 neo-Nazis in Borlänge, Sweden. 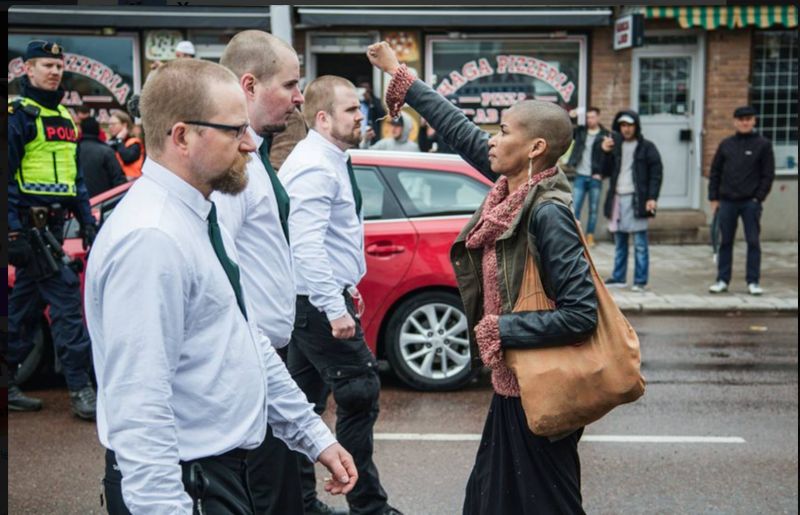 Back in 1985, a brave woman who survived concentration camp in Poland hit a Swedish neo-Nazi with her bag. 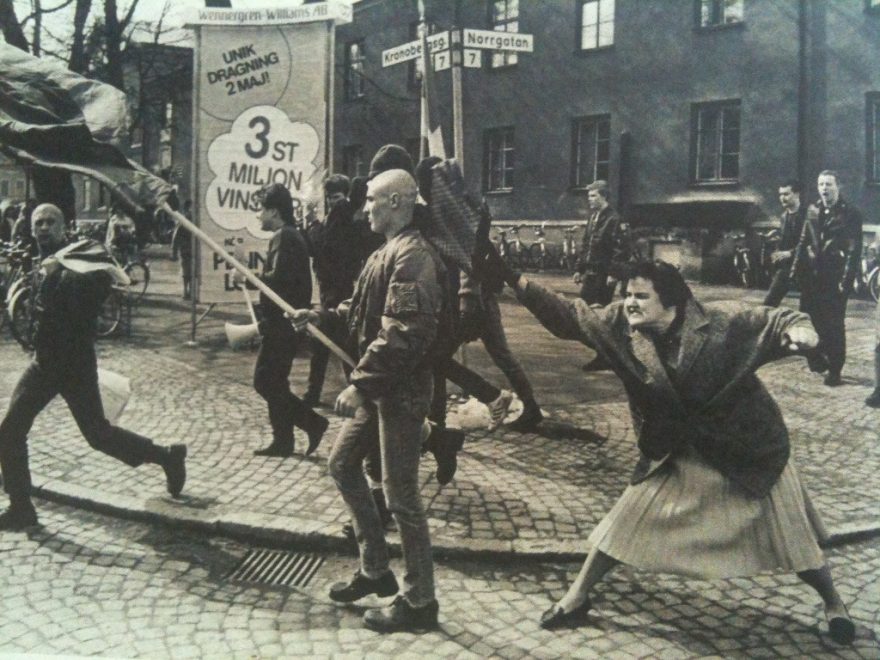 Ieshia Evans was protesting the horrible death of Alton Sterling, a black man who was held by two white officers and shot multiple times in Baton Rouge, Louisiana. 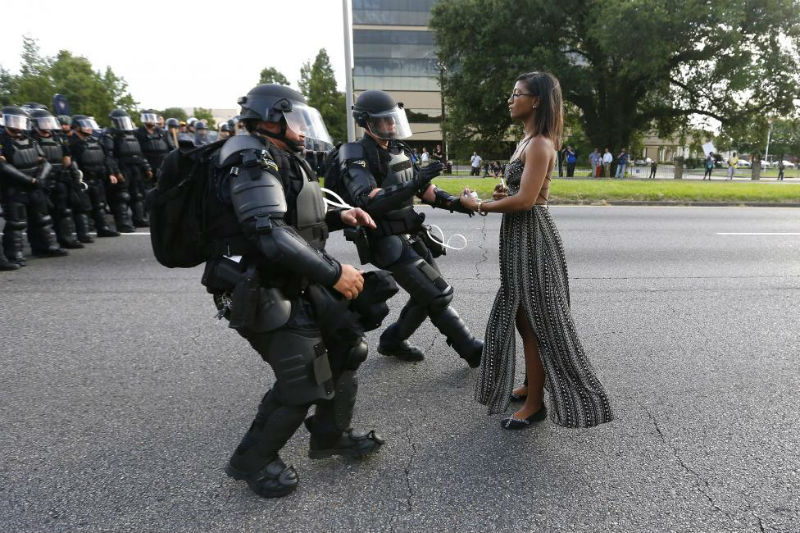 Lucie “Lala” Myslíková, a young girl scout from Brno, Czech Republic, bravely stood up to a bunch of neo-Nazis. She was just sixteen years old! 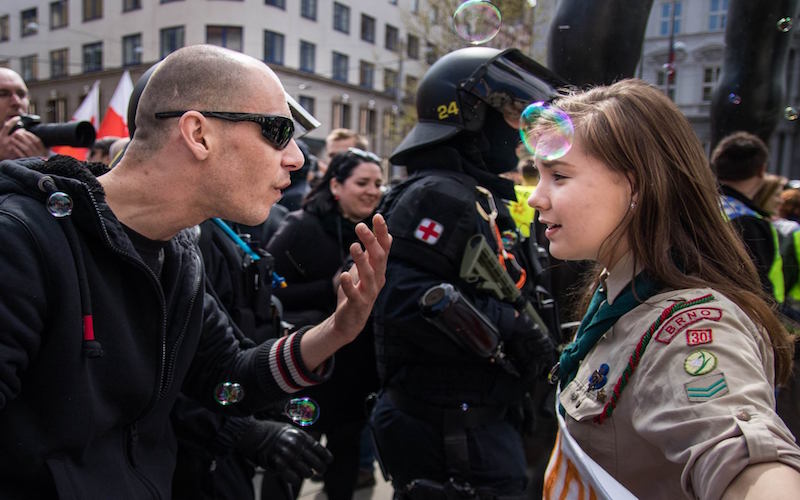 Saffiyah Khan is smiling peacefully while confronting a member of the English Defense League in support of Saira Zafar, a Muslim woman who was bullied by 25 EDL supporters for wearing a hijab. 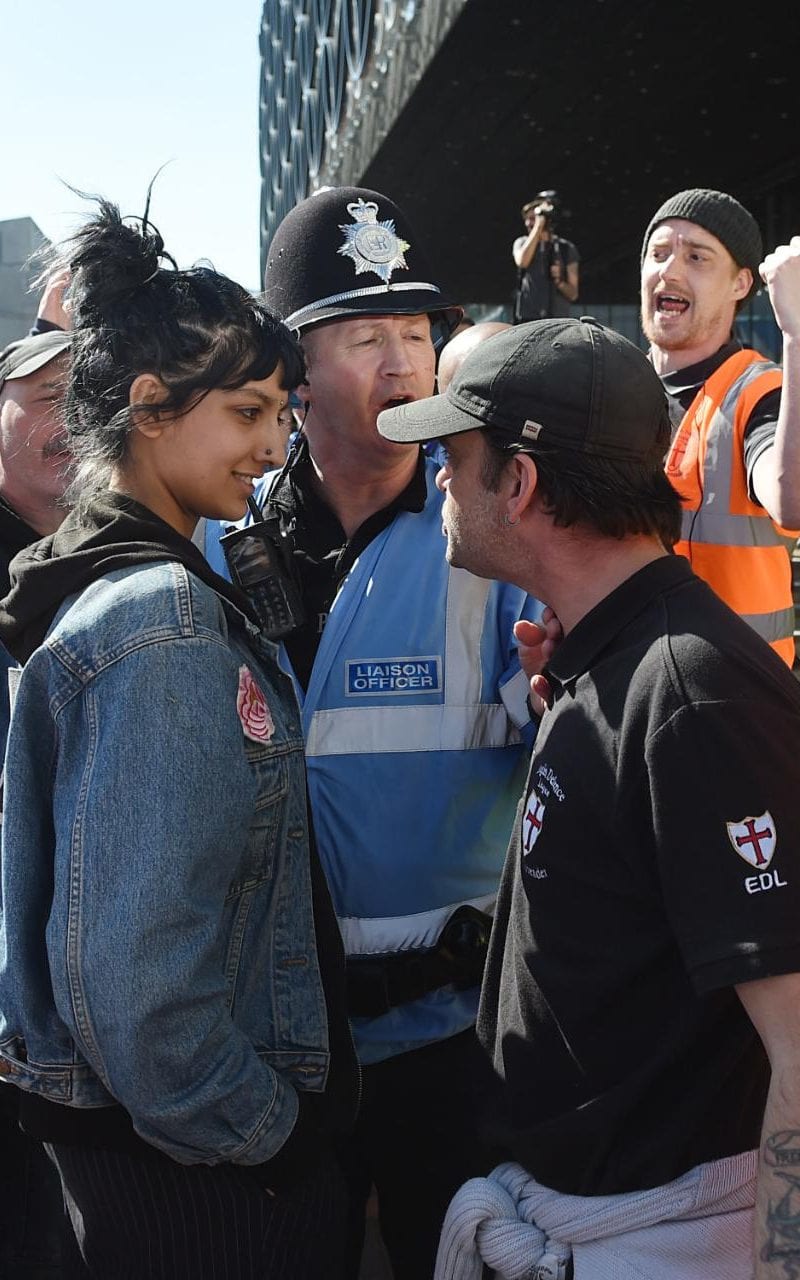 Jasmin Golubovska applied bright red lipstick and kissed the helmet of a riot police officer. This happened during a protest against the cover-up of Martin Neskovski murder by a policeman in Macedonia. 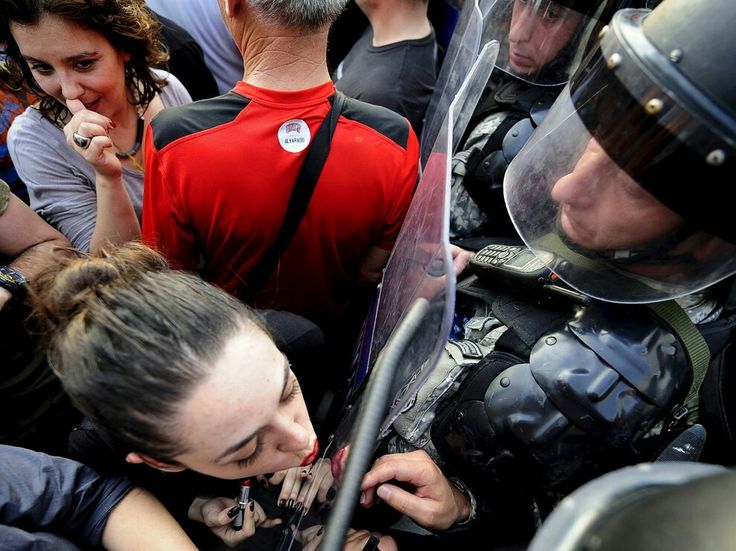 This woman from Seoul, South Korea, took part in a protest against the government policies and the reforms of the pension system. She just peacefully sat in front of the police. 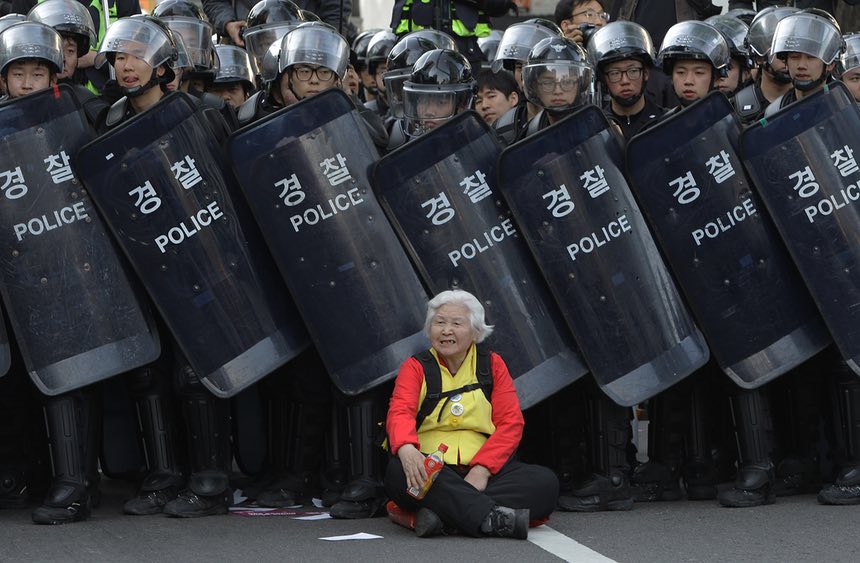 An anonymous young lady was staring a policeman right in the eye during the protests that commemorated the 1973 coup in Chile. 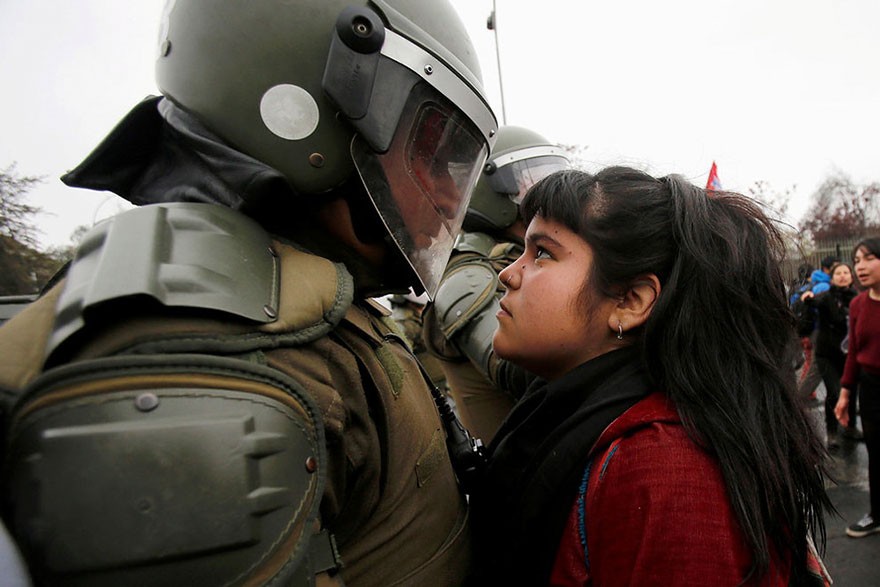 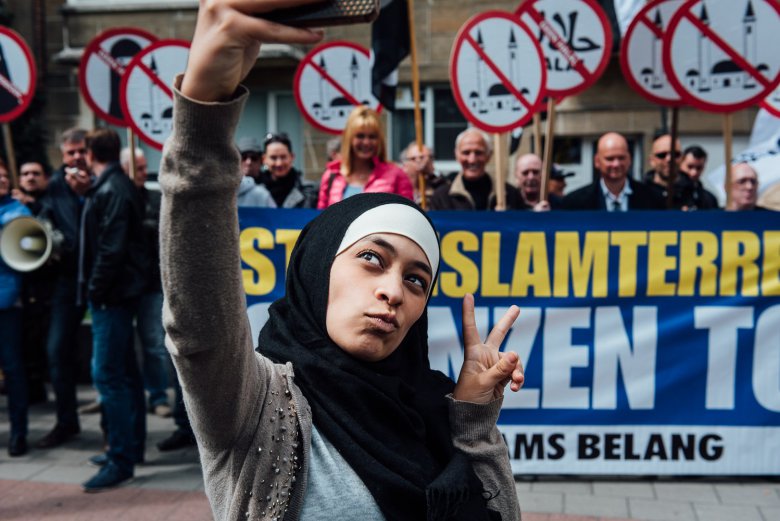 Kubra Khademi, an activist and a performance artist, created special body armor and walked through Kabul wearing it in order to protest the harassment of women in the streets. 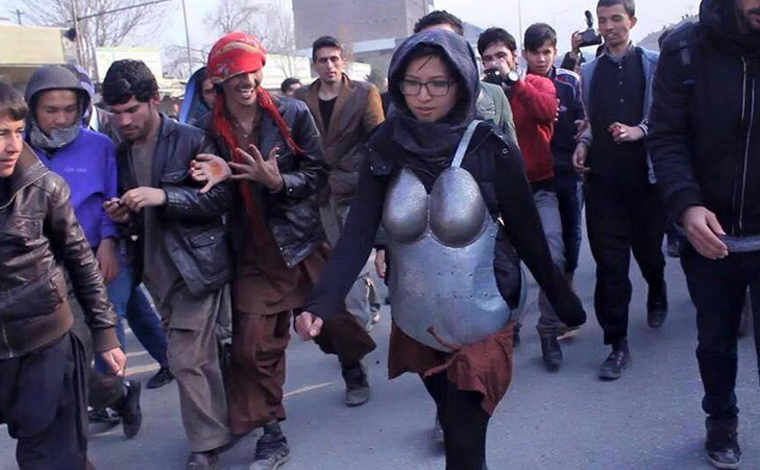 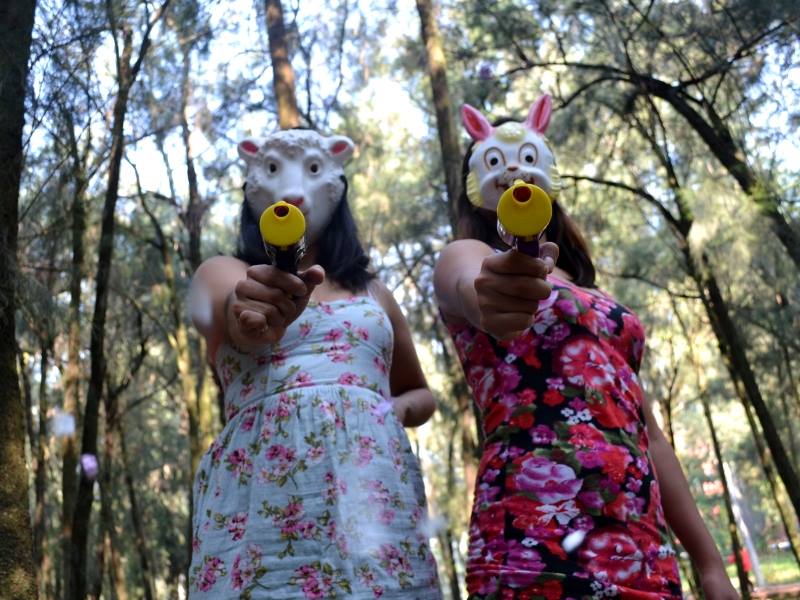 This brave woman took part in a protest over the death of Keith Lamont Scott, a black man killed by a white police officer, in Charlotte, North Carolina. She was gesturing at the police with hands covered in blood. 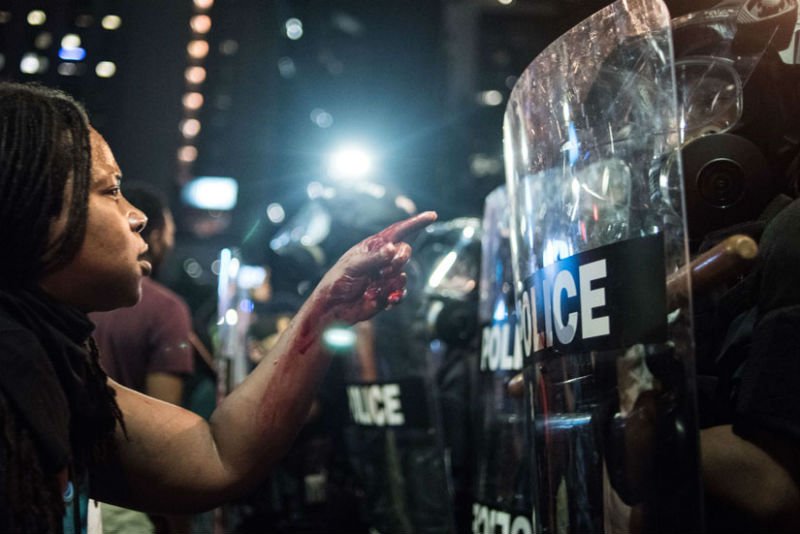 An anonymous woman in a wheelchair confronted a bunch of riot policemen during a riot against the twisted and corrupt welfare system of Bolivia. 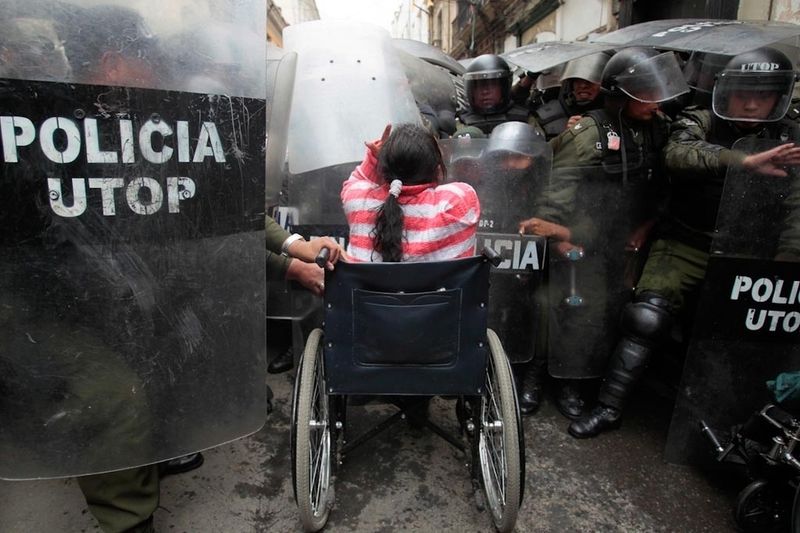 A French woman took part in a May Day march and offered a bouquet of lilies to a member of the riot police. 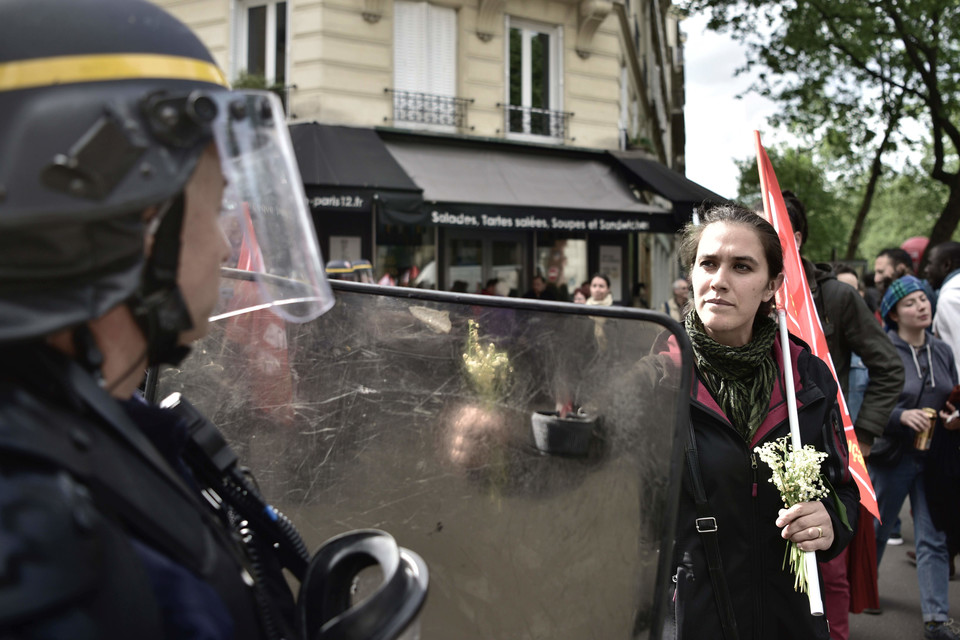